In the beginning, the movies were of two minds —D.W. Griffith’s and Mack Sennett’s.

Griffith and Sennett were both young men when they came stumbling into the Biograph Co. in 1908. Each had tasted professional failure and was more than eager to give the upstart racket of motion pictures a go. They found they worked well together as they set about learning the business of telling stories through strips of celluloid. But Griffith perceived the solemn potential of the new medium to influence audiences, and he treated it as an art form. Sennett was far more likely to do what his gut told him to do, and he mainly saw cinema’s capacity for entertaining the masses.

The two careers launched at Biograph over the course of a few months would soon diverge and veer off in separate ways. But both men left deep tracks in the mud for others to follow. Their trails into uncharted territory defined the schizophrenic nature of all commercial filmmaking to come, and served as the template for “artistic differences” in the 20th century.

Mack Sennett, 28, escaped the dirt and poverty of his upbringing amid the mines and iron mills of working-class Quebec, coming to New York in hopes of a career as an opera singer, of all things.

In a tiny music studio in the labyrinth of Carnegie Hall, a vocal coach by the name of Professor Waldermar took Mack in and encouraged his ambitions. Sennett would later write in his autobiography, King of Comedy: “He said I would need a lot of work but that I had good equipment. No control, no diction, but good, loud equipment.”

Voice lessons were not cheap, so Mack took odd jobs on the Bowery, sometimes singing or playing small parts in burlesque skits. He fell in love with the sound of an auditorium rocking with laughter.

At the ripe age of 33, David Wark Griffith arrived at Biograph from a more complex background. Whatever blame we lay at his feet today, Griffith was cut from much the same cloth as progressive leaders like President Woodrow Wilson. He soaked up literature and the works of Shakespeare, running off when he was still in his teens to become a stage actor, later a playwright.

Although he comported himself as an aristocrat and an elitist, Griffith was no small-minded “son of the South.” He was born more than a decade after the American Civil War. He viewed his crippled war-veteran father, a former Confederate colonel named Jacob “Roaring Jake” Griffith, as a mostly pitiable figure, emotionally aloof and determined to drink away what remained of his life in seclusion. Young David’s true political hero was Abraham Lincoln, the Great Emancipator, a more noble tragic figure whom the filmmaker would return to again and again throughout his career.

Long-armed and stoop-shouldered, young Mack Sennett had difficulty finding clothes that fit him. With all the social uneasiness of a born clown, Mack distrusted authority and was suspicious of pretension. One afternoon during a break on the Bowery he went to a “nickel theater” and saw a film from France starring funnyman Max Linder, who brought his own form of burlesque to the screen.

The audience roared and applauded heartily, as if the comic were right there on stage. Mack became a fan of the comedy features and especially loved those that mocked society figures and treated snooty politicians and policemen as figures of fun.

In 1907 Griffith was hoping to transition from actor to playwright. He expressed his populist idealism in a play titled A Fool and a Girl. It pushed back against Edwardian notions of proper behavior and celebrated the more “salt of the earth” Mexican migrants scratching out their living in the sun-baked California soil.

Griffith’s dreams of being a successful playwright were dashed by his play’s brief, one-week run. He returned to New York and took work at Edison’s Vitagraph Co., acting in films for Edwin S. Porter, the celebrated director of 1903’s The Great Train Robbery. Griffith did not like how Porter treated actors and found American Biograph more open to his artistic suggestions. Biograph’s owners gave him a chance to direct for them in 1908, and among his first hires was an odd-looking duck calling himself Mack Sennett.

Judging from what we know of those early months, Griffith and Sennett formed an effective team. Griffith used Mack as a sounding board for his ideas. He often bought Mack’s one-page scenarios for new films. Some were taken from newspaper headlines, though Mack was not above stealing from other writers. His script for Biograph’s lost comedy “Trying to Get Arrested” was lifted from a recent O. Henry magazine story about a hobo’s fruitless efforts to earn himself a nice warm jail cell over a snowy holiday season. 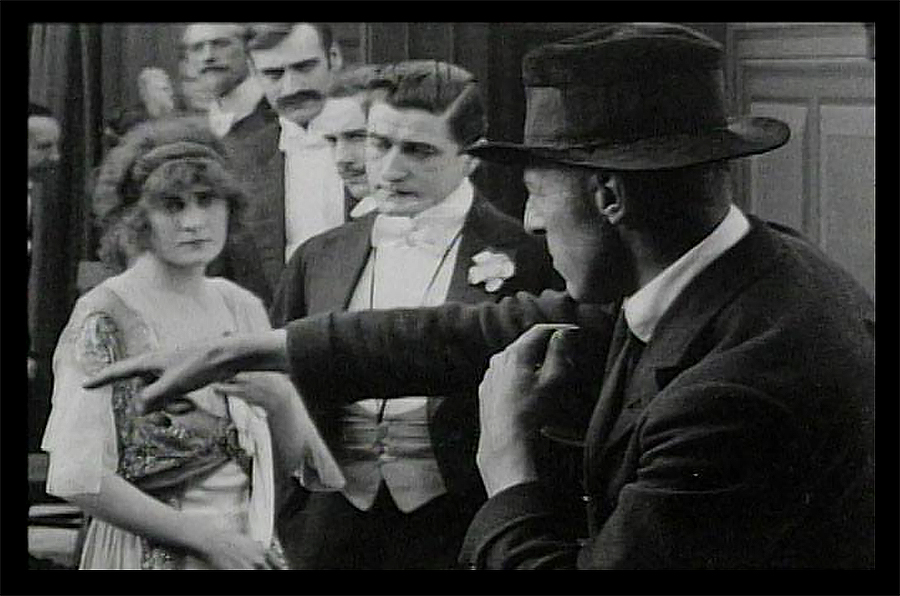 Mack admired Griffith’s control over a production and his knack for finding the right visual treatment for his stories. He was not-so-secretly studying Griffith’s style, and it must have flattered the slightly older director to see Mack’s sense of dedication. He made Sennett his first “assistant director” — although in those days that term meant he might do anything from set construction to keeping the coffee pot filled.

1908 turned out to be a pivotal year for the movies. Three million people across America were attending neighborhood cinemas on a weekly basis. Each month hundreds of new vacant storefronts were converted to use as nickelodeons. Motion pictures were growing too fast for their own good, and busy studios like American Biograph had to grope for direction through a spreading inky cloud of censorship and regulation.

At the end of 1908, New York Mayor George B. McClellan revoked the business licenses of all the nickelodeons in his city just ahead of the all-important Christmas holiday. McClellan cited fire danger and inadequate safeguards as his deciding factors, though the mayor was probably more concerned about his own political exposure. His rivals were taking up charges by clergymen and civic groups that motion pictures were a corrupting influence. All this came to a head in early 1909 with New York’s first Board of Censorship, empaneled to review and certify all new films.

Griffith and Sennett tried to keep Biograph out of the political storm while they learned to use the medium for their own ends. Griffith was intent on turning out influential “message plays” about the plight of social outcasts, making an impressive string of films about the nobility of Native American “redmen.” He also took on capitalistic greed and abuse, anarchism, and the social ills of poverty, notably criminal behavior and alcoholism.

Meanwhile, Sennett’s physical bulk and heavy jaw made him a natural for portraying a gamut of brutes and criminals on screen. That would change, though, when Griffith put him in a lead role as a tipsy decorator who causes havoc in town while trying to deliver a new curtain pole. Sennett was emulating his French idol, Max Linder, as he mugged his way through a series of raucous, knockabout gags.

“The Curtain Pole” out-performed nearly all of Griffith’s more earnest feature film efforts in the winter of 1909.

Mack felt emboldened to come up with more stories that could ignite antic mayhem on screen.

Everything Griffith had come to value about his leadership position at Biograph was threatened by Sennett’s box office success. He was still planning to adapt great literary works by Shakespeare, Emile Zola, Edgar Allan Poe, Jack London, Robert Browning and others. But Sennett was in there pitching his “slapstick” comedy ideas, making light of policemen and preachers. The former burlesque clown was not even above using marital infidelity as a theme for his jokes!

Eventually both men realized they would have to form their own film companies if they hoped to realize their visions.

Mack opened the Keystone Picture Studios in Edendale, California in 1912. It was dedicated to bringing moviegoers slapstick farce and new comedians like Charlie Chaplin and Mabel Normand. It also provided a showcase for bathing beauties and home of the soon-to-be world-famous Keystone Cops.

Keystone remained a major brand in Hollywood long after Mack was driven out by bankruptcy in 1917. Sennett’s “slapstick” comedy tradition was carried on by Hal Roach and other producers, though Sennett remained in Hollywood as an active force in comedy films through the 1930s.

Griffith would also soon trade New York for California, making the split from Biograph official in 1914. The old studio drew a line at financing his multi-reel feature films, mostly dramas. His 1915 production of The Birth of a Nation was a box office phenomenon that made him rich as well as despised. He never came close to producing a film with that level of impact on America again.

Griffith’s films would go on to inform and inspire the future work of classicists like Josef von Sternberg, Carl Theodor Dreyer, Ingmar Bergman and generations of auteurs inside and out of a studio system. Sennett carried forth the banner of pure entertainment, founding a dynasty of romantics whose celluloid stories centered on intense character involvement and sentiment in everything from musicals to gangster flicks and on through Hollywood’s golden age to our own era

The growing artistic schism between Griffith and Sennett plays out as the backdrop of my new book, The Designated Virgin: A Novel of the Movies. It is now available from Pulp Hero Press at Amazon and other fine book dealers.