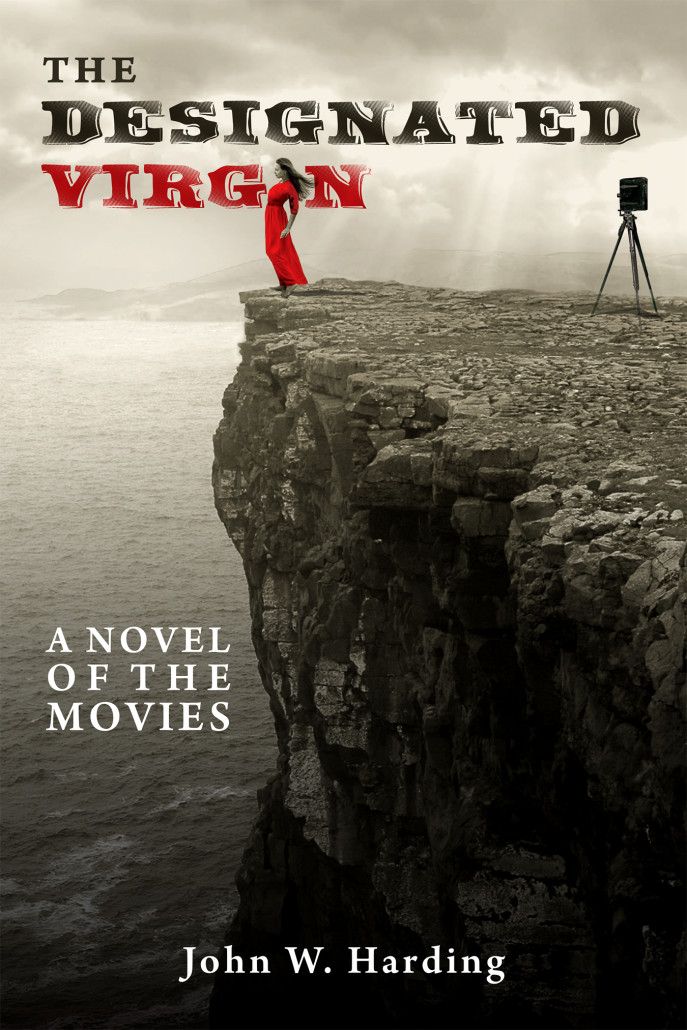 (My new historical novel is now available in paperback and as a Kindle eBook from Pulp Hero Press. If you read it, I would love to hear your reaction. -JWH)

The Designated Virgin is the untold story of America’s first battle over motion picture censorship.

In 1909, fresh-faced Augusta Lee arrives at the doorstep of New York’s busiest little film studio, the Biograph Co., and finds it engulfed in a firestorm that threatens the survival of the whole new art form.

A recent Biograph film has portrayed dissolute American writer Edgar Allan Poe as a tragic hero, and the ladies from the local temperance league will have none of it. They are picketing the studio and calling for a boycott of movie theaters as a warning to all who would glamorize alcohol addiction.

Augusta may be only 18 years old but she was raised on a Mississippi show boat and is more experienced than she appears. She proposes they fight back against the protests using their own tactics, and energizes the colorful crop of studio hands, including future “king of comedy” Mack Sennett and handsome Irish leading man Owen Moore.

Biograph’s new resident director, an unknown Kentucky playwright named David Wark Griffith, sees his fellow Southerner as a glimmer of hope. Perhaps Augusta can help them clean up their sullied reputation and elevate the whole “peep show” image of this fledgling industry.

One thing he may have overlooked, however: When planning a brighter future, never pin your hopes on a “designated virgin” … with a past.

A Note on the Title

Deep in the annals of show business are countless dirty jokes and ribald tales of a “designated virgin.” It is a legacy rooted in American history — although the ploy itself may be as old as the dramatic arts. Some insiders believe that some variation of the tactic may even be going on today.

When New York theatrical producers of the mid-1800s first sent their hit plays out on tour, the traveling companies would often find themselves challenged by local defenders of “community standards.” Provincial sheriffs and self-righteous justices of the peace would meet their trains and caravans carrying shotguns, determined to halt the spread of “sinful” entertainments.

A savvy troupe manager would dipatch his most innocent-looking young flirt out to meet the opposition and win them over. This person became known in actors’ camps as “the designated virgin.”

In the first decade of the 20th century there was a new form of traveling theater. It was a “poor man’s theater” known as motion pictures, and it spread like a prairie fire across the nation. It By 1910 there were 8,000 storefront nickelodeons on the main streets of every small town in America, all showing programs of short films produced mainly in New York or Chicago. These motion pictures were being consumed by 25 million people each week, and there was nothing any provincial sheriff or justice of the peace could do to stop them.

To upright Edwardian ladies and gentlemen the flickering images of kissing couples and saloon gals and train robbers were glorifying vice, alcohol use and illicit sexuality. To the righteous they appeared as nothing less than warning glimpses of an approaching Bacchanalia. Moral crusaders joined with reformers, politicians, editorial writers and clergymen to oppose the barbarians at their gates.

New York City was the center of motion picture production in America. The first film studios there were like the “garage bands” of their day. Instead of electrified instruments they dealt in electrifying images. Broadway actors performing under assumed names, slumming stage directors, vaudeville players, self-styled inventors and countless hopefuls wanted to become a part of the new entertainment miracle.

Before 1910 the dedicated artists among them toiled out of sight in brownstone garrets with limited resources. They met the clamor for more filmed stories by stealing ideas from plays and novels and magazines. Often what they produced was more innocuous than salacious. But what they reflected was a diverse society beyond the edge of town, and exciting new horizons of love, ambition, heartbreak and social injustice.

Never had a threat to the status quo arrived with such force and fanfare. America’s elites fought back with editorials and regulations and the imposition of new laws. Before the Christmas holiday of 1908, New York City Mayor George B. McClellan bowed to pressure by revoking the business licenses of all the nickelodeons in Manhattan.

Motion picture studios like American Biograph, one of the busiest suppliers of feature films, were desperate to end government interference. The first self-regulated boards of censorship was one industry response. Biograph’s owners and their newly installed resident director, Lawrence Griffith, hatched a different scheme. They would introduce America to their very own “designated virgin” and put a fresh, wholesome face on their industry.

“The Designated Virgin: A Novel of the Movies” by John W. Harding, is now available from Pulp Hero Press. It can be purchased on Amazon and at better book providers everywhere.