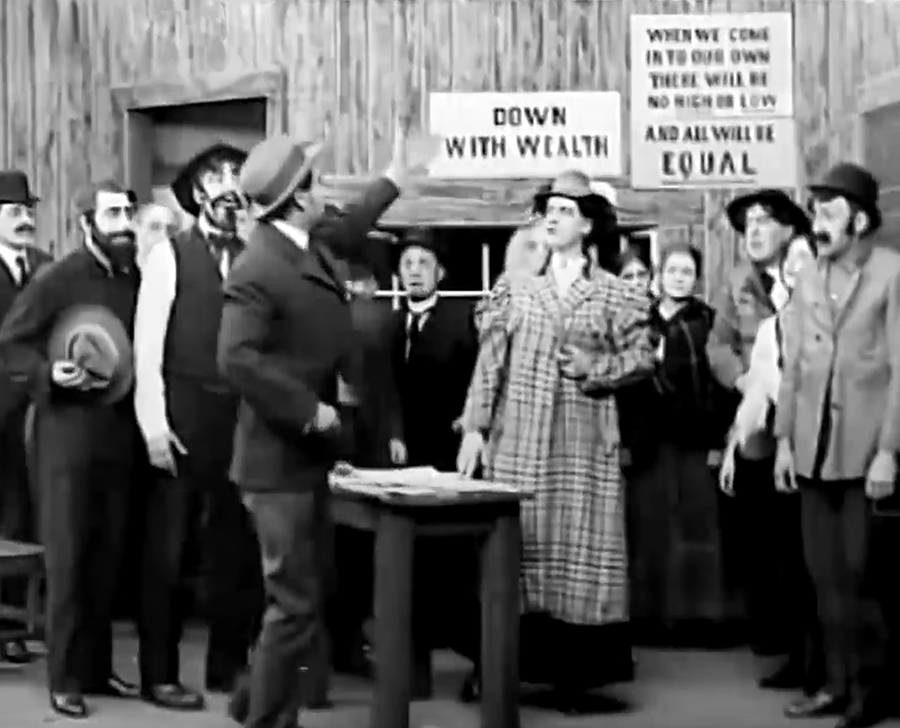 “When we come into our own there will be no high, no low, and all will be equal” reads the sign at a meeting of “social justice” warriors in Biograph’s 1909 feature film, “The Voice of the Violin.” D.W. Griffith was still working under his old stage name as Lawrence Griffith and still getting a handle on motion pictures when he directed this revealing look at so-called “anarchists” in America after the turn of the century — eight years prior to the start of the Russian revolution.

In “The Voice of the Violin,” a German musician living in poverty in Manhattan is making ends meet by teaching violin to pupils from well-to-do families. He is romantically attached to an unmarried female student named Helen, daughter of a wealthy industrialist. But due to an obvious “disparity in rank” between them, her father forbids their socializing.

Brooding and angry to see his adopted country just as divided into classes as the world he has escaped, the music teacher finds comfort in the arms of an underground society that believes in Karl Marx’s revolutionary agenda. “Down with Wealth” declares a poster in their secret party headquarters.

To prove his commitment to their cause, the music teacher agrees to plant a bomb in the home of a wealthy capitalist. The targeted home, unbeknownst to him, is to be none other than the family residence of his beloved Helen.

D.W. Griffith is generally thought of as a product of his 19th-century upbringing. But anyone studying his output as a writer and director of films at Biograph from 1908 to 1913 must come to terms with “The Voice of the Violin” and numerous other examples of modernist thinking in his productions.

Griffith’s only produced play, 1907’s “A Fool and a Girl,” romanticized and celebrated Mexican migrant culture in California. He continued to explore the theme of social bias and racial prejudice in many of his early films at Biograph.

Griffith’s Western films were often told from the vantage of Native Americans. His 1909 film “The Redman’s View,” showed the Kiowas “driven from place to place” by the white man, right up to the bitter end, which treated the death of the tribal chief with great sympathy. The film was marketed to exhibitors in studio bulletins as “a beautiful depiction of the trials of the early Indians.”

Elsewhere, Griffith lashed out at the unfair treatment of Asian immigrants, Mexican Indians, and even Zulus, while often portraying bankers and “monopolists” as greedy and heartless. In 1909’s “A Corner In Wheat,” poor families were seen lining up for loaves of bread and unable to afford the rising costs set by speculators.

Meanwhile, the wives and families of Wall Street capitalists were seen drinking and dining in elegant restaurants and living high on the hog.

In “Through the Breakers,” also from 1909, he dramatized the plight of children neglected by the newly rich “slaves of society.”

Simple laborers, rural farmers and humble fishermen were often seen as suffering under harsh economic conditions, largely unprotected against the elements and hounded by ruthless authorities. Griffith himself always lived one step away from starvation in those early years. In his autobiography he frequently refers to “the wolf” at his door.

No other pioneering filmmaker before 1910 was as actively engaged in the cause of social justice than D.W. Griffith. He took on the alcohol industry in two powerful “temperance lectures,” “The Drunkard’s Reformation” and “What Drink Did.” And he defined the gangster genre by showing criminal bands as a product of inner-city poverty and neglect in “The Musketeers of Pig Alley” (1912).

None of this fits with the idea of Griffith as a rabid Southern apologist. The truth is, Griffith grew out of an enlightened and literate internationalist stew — the same liberal stewpot that produced President Woodrow Wilson, “that tragic idealist,” and launched the modern so-called “progressive” movement.

The world itself had been shrinking ever since the American Civil War years. The spread of commerce, freer shipping routes, improvements in mass publishing and photography were all spurred on by international fashion interests and a burgeoning travel industry. Mark Twain popularized travel writing with his visits abroad, and an old Civil War general named Lew Wallace gave readers of “Ben-Hur” a first-hand account of his pilgrimage to the Holy Land.

By the time “The Voice of the Violin” was showing in nickelodeons in 1909, violent political change was in the air. Charles Darwin had undermined stabilizing beliefs in creationism. While capitalism was the driving force behind so much of the whirlwind growth of wealth and education in the world, certain pockets of the population saw a need to free themselves from the yokes of the past.

The dark figure of the anarchist with his home-made bombs and his excuses that “the ends justify the means” was already a recognizable figure in editorial cartoons and took center stage in the popular 1907 novel “The Secret Agent” by Joseph Conrad.

No less an all-American writer than Jack London also published “The Iron Heel” in 1907. While others talked of utopia and building a “workers’ paradise,” London called for a global workers’ uprising to stop the sort of dark nationalist malignancy that led inevitably toward a Great World War.

In his autobiography, D.W. Griffith recalled nights spent in saloons with friends “listening to that mighty word juggler, Jack London, as he kicked the old world out of the window and swiftly hauled a magnificent new one in the door.”

In “The Voice of the Violin,” the disenchanted music master (Herr Von Schmitt by name) arrives at the upper-class neighborhood to plant his bomb. He agrees to stand watch outside the home as his comrade slips into the basement via a coal chute carrying the bomb. But as he waits on the steps, Von Schmitt hears a familiar sound coming from inside the house. It is a violin piece he himself has taught, and when he peeks through the window he recognizes his sweet Helen there practicing her instrument.

For Griffith, it was fitting that art be shown as the one element capable of uniting a society. It is also music that brings the man to his senses in the nick of time to stop the fatal blast. In the sort of “race against the clock” that Griffith would develop and refine through future films, the teacher wrestles with his socialist comrade in a bid to defuse the explosive.

Von Schmitt succeeds and survives to find himself branded a hero. The rich father gladly bestows his blessings on the teacher in the pursuit of his daughter. In fact, he lifts Von Schmitt’s arms and places them around his Helen as if to seal the promise.

But this isn’t quite The End. Keep watching, for as the embrace continues, the teacher allows Helen’s violin to slip from his fingers. He and his student are now equals in the eyes of society. And as he draws her closer to him he loosens his grip on own prized instrument — source of his livelihood and presumably his self-identity — and lets it fall to the floor as well. This is the end.

D.W. Griffith was too much the sentimental romantic to let either art or revolutionary politics become the purpose and end-all of life. Even with its ability to create beauty and unify people, art yet remains just one divine element of human existence. Above it, the only thing of lasting worth and beauty, he says in “The Voice of the Violin,” is love.

(Parts of this blog were previously published by the author as “D.W. Griffith’s Fight For Social Justice.”)

(For more about D.W. Griffith and his early years of movie-making at Biograph, watch for my true-life novel “The Designated Virgin: At the Dawn of Movies.” It’s intended to be the same great mix of research, insight and page-turning excitement as in my previous novel, “The Ben-Hur Murders: Inside the 1925 ‘Hollywood Games.’” For information, go to www.thebenhurmurders.com. Thank you for your support and feedback!)