It’s a sad failing of silent film history that there isn’t more documentation of events in Italy during MGM’s first location shoot of “Ben-Hur.” Judging from the little that survives in memoirs, budget sheets, studio memos, and in a smattering of Italian newspaper articles, it’s a fabulous story full of drama, conflict, intrigue and death.
Perhaps one day I will write it as a prequel to my Hollywood novel, “The Ben-Hur Murders: Inside the 1925 ‘Hollywood Games.'”

Italy in the early 1920s was in a period of urgent political turmoil under emerging fascist dictator Benito Mussolini. Mussolini had been a prominent Marxist and pro-labor figure before the war. He edited a radical Socialist Party weekly named The Class Struggle, and thought of himself as an intellectual. European communists were all emboldened by the 1917 “workers’ revolution” in Russia, and actively sought control over the work force via strikes, violence and social agitation.
By World War I, however, Mussolini had rejected class warfare and saw Socialism as a dead doctrine that continued to exist “only as a grudge.” He was expelled from the Socialist Party and embraced anti-egalitarian views, joining the Fascists to combat communism and dismantle the unions.
He gained political power in 1922 and began laying the groundwork for totalitarian rule enforced by Fascist blackshirts.
Meanwhile, in the wake of the war, the Italian economy was stalled and badly in need of a shot in the arm. Enter everyone’s favorite cash cow, Hollywood.
Metro Pictures had paid $600,000 for the rights to film Lew Wallace’s best-seller “Ben-Hur.” That single indigestible red-line item was very much behind the formation of Metro-Goldwyn-Mayer. But the Wallace deficit could still be made into an asset for the new studio if the picture showed a profit. So executives turned to filming in Italy as a way to make it on the epic scale readers expected and still bring it in on budget.
Mussolini rolled out the welcome mat, promising complete support for this ultimate prestige project. But even a dictator could not deliver the hearts and minds of his citizens.

Again and again labor shutdowns and transportation strikes halted work on the film. Co-star Francis X. Bushman cozied up to Mussolini, then returned to the set singing his praises. He saw the new Italian strongman as exactly the sort of leader the country needed to survive its challenges.

Bushman’s opinion enraged pro-labor forces and followed the actor all the way back to Hollywood, where labor battles were brewing. Indeed, it was probably more responsible for Bushman’s unofficial blacklisting  by the studios in the late 1920s and throughout the 1930s than any of his famous run-ins with MGM studio head Louis B. Mayer.
The great political gulf in Italy also played a huge role on the location shoots. MGM art director A. Arnold Gillespie wrote about his experience on the set at Livorno overseeing the great Roman sea battle with pirates. Four hundred extras were employed for hand-to-hand combat aboard the warring ships. 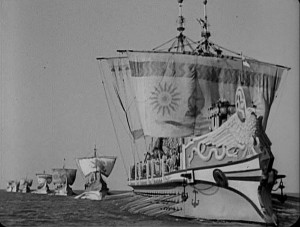 “Our noble Livornese were doing the big fight scene with vigor and (as we had found out at the last minute) political intent,” he wrote. “Only the previous day it had been discovered that in casting those extras to be Romans and those to be pirates, there had been some dark doings.

It seems that a fairly equal division of pro-Mussolinians wound up as Romans and anti-Mussolinians as pirates. 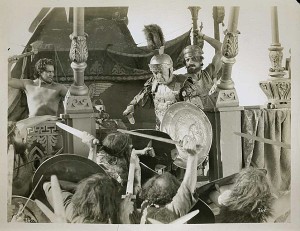 “The alertness of one of the property crew uncovered the startling fact that these gentlemen had been sharpening spears, swords and other weapons in preparation for the melee. … Fortunately, we were able to restore the weapons to their original less-lethal state, but it was quite impossible to totally blunt the enthusiasm of the combatants.”

I have written in other posts here about the calamity of that fiery sea catastrophe, and how a prop master tried to hide any evidence of drowned bodies and what have you.

But that was not even the gravest catastrophe that occurred in Italy. There was also a typhoon that leveled the epic outdoor sets, as well as many other weather-related delays both in construction and in shooting. There were also untold deaths of horses during the first attempt to film the great chariot race, and Bushman himself has written at length about the death of one stunt driver he witnessed.

All of this prolonged the production schedule, multiplied costs, and raised the ante on filming abroad. Finally, Louis Mayer ordered the whole production back to California to virtually start anew at the start of 1925.

For the story of what happened next, check out my extensively researched historical novel, “The Ben-Hur Murders: Inside the 1925 ‘Hollywood Games.’ It is available on Amazon.com in a digital download Kindle version as well as in a glossy, low-cost paperback edition. It is also available in hardcover from Lulu Press.