Even if you don’t recognize the two famous people above and know nothing about their legendary Hollywood marriage, which of them would you guess held the power in that relationship?
Putting the two photos side-by-side dramatically illustrates my belief that it was the woman in this case, Norma Shearer, who dominated their union.
That is meaningful when you consider that it was the man, Irving Thalberg, who carried the keys to the “dream factory” kingdom that was MGM.
All the biographers tell us that Thalberg was the “Boy Wonder” who distinguished himself as an executive at Universal in his early 20s with “Hunchback of Notre Dame,” insisting on the casting of Lon Chaney. Later, young Irving personally fired out-of-control director Erich von Stroheim from his own movie project. That one act is said to have shifted the balance of power in early Hollywood away from the autocratic rule of film directors, putting it solidly in the hands of the new studio producers.
After being lured away from Universal by Louis B. Mayer, Thalberg was made vice-president in charge of production at the newly formed MGM. From 1924 until his death in 1936, Thalberg wrote the contracts, green-lighted the properties, negotiated the deals, assembled the production crews and cast the leads in virtually every prestige MGM film. 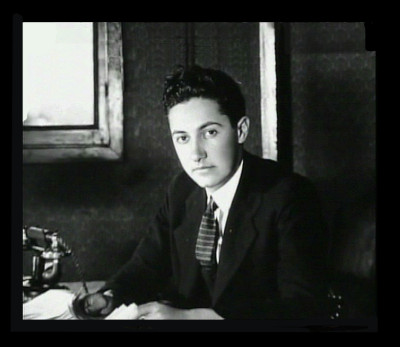 Look again at the photo of him sitting confidently at his MGM desk. In his first years there he produced “The Big Parade” and oversaw the recasting and completion of the troubled “Ben-Hur” production.

Through it all, he never put his name in the credits of a motion picture. He said that “credit you give yourself is not worth having.” Artists as diverse as F. Scott Fitzgerald and the Marx Brothers adored him.
One sees another truth about Thalberg in that photo, however. He was forever the bookworm. He was born with a heart defect that doctors warned would probably kill him before he was 20, so he grew up a virtual recluse with his novels and history tomes.

For two years after leaving Carl Laemmle’s employ, he continued to date Laemmle’s wallflower daughter, Rosabelle, and only reluctantly accepted the mantle of “the most eligible bachelor in Hollywood.”

Although he had strong convictions when it came to stories and studio properties, he was far too introspective to dominate social gatherings. Eventually, he chose to surround himself with “alpha males” like Victor Fleming, who had once had a brief fling with Norma Shearer. At this time, though, Irving was completely smitten with footloose Jazz Age party girl Constance Talmadge.
Most accounts have it that when Irving tired of getting the runaround by “Dutch” Talmadge, he began to see Norma Shearer in a new light. When the time was right, the man popped the question and the lucky actress agreed to become his wife.

Wrong. Look again at the portrait of Norma by famed glamour photographer George Hurrell. Shearer was no shrinking violet. She was outgoing and very social, and by the time that Irving proposed to her she had already re-invented herself countless times.
Moving from Canada to New York with her mother and sister after her father’s business failed, the would-be concert pianist made the same rounds as all the other ambitious young women. She had an “in” with theater mogul Florence Ziegfeld, but he said her figure wasn’t good enough. Then she got a job as an extra with D.W. Griffith, but the pioneering director told her that her pale aquamarine eyes would not register well on film. Besides that, she had a “lazy eye” that could make her appear cross-eyed at times.
But Norma persevered. She did daily eye-correction exercises, and she began training and re-shaping her body. She became the “Springfield Tire” girl, and finally began landing good roles in films.
By the time Thalberg brought her out to the West Coast for MGM, Norma had remade herself from an ingénue to an action heroine to a vamp. She had a firm grasp of her assets and limits, knew what she wanted, and was smart enough to negotiate her own contracts.
Irving Thalberg was a bright man who took full advantage of the opportunities that came to him. Norma Shearer stayed up late making her own opportunities.
And yet in most of the accounts of their relationship, the writers have assumed that Thalberg was the man with the power and Norma was just lucky to have been asked to be his wife.

I set out to balance the ledger some in my novel, “The Ben-Hur Murders: Inside the 1925 ‘Hollywood Games’.” Both Irving and Norma are major players in that story. It is Norma who decides at the beginning of the novel that it is high time to change the status quo when it came to the relationship with her boss, Irving Thalberg.
Her journey to accomplish that on the day that Thalberg is busy overseeing the exciting “Ben-Hur” chariot race in Culver City serves as counterplot for the action down on the track. It’s an “Upstairs/Downstairs” look at Hollywood power plays in the so-called Jazz Age. That is the real meaning of the subtitle, “Inside the 1925 ‘Hollywood Games’.”
Truth be told, I could never find any historical mention of Norma Shearer being on the set that day. But I took some artistic license there because, after all, it stands to reason that she was. As the leading female contract star at the new MGM, she would have gotten her engraved invitation along with the hundreds of other studio insiders, celebrities, colleagues and L.A. power brokers on Irving Thalberg’s V.I.P. list.
Failing to show up for the biggest, most costly spectacle of the silent era would not have been a smart career move. And Norma was all about making smart career moves.
So, which of the two people in the photo above had the real power?
Let me ask a different way: Which of those two people could have eaten the other alive?

For information on “The Ben-Hur Murders: Inside the 1925 ‘Hollywood Games’,” go to www.thebenhurmurders.com.