On May 10 in Baltimore I attended the Alloy Orchestra’s concert screening of Rudolph Valentino in “The Son of the Sheik.” This was the version that debuted last fall at the San Francisco Silent Film Festival.

In Baltimore it was presented as part of the annual Maryland Film Festival, so here’s a heads up: If you ever hear that the fabulous Alloy Orchestra is doing a concert screening near you, drop everything and get yourself there.

Ken Winokur and his two Alloy band members — Terry Donahue (accordion, “junk” percussion) and Roger C. Miller (electric keyboard) — have created a host of scores for silent classics like “Metropolis,” “Man with A Movie Camera,” “Phantom of the Opera,” “The Black Pirate” and many more. Unlike the often static or stuffy accompaniment found on many past video editions of these films, the scores fashioned by Alloy are fun — defining and amplifying the emotional currents of the stories.

The musicians get a truly dynamic sound out of no more than keyboard wizardry and an imaginative variety of percussive instruments. Add to those a spine-rattling bass and a faux string section that neatly underlines the film’s suspense, comedy, and dramatic complications. The result is a multimedia art form unique to this genre.

This 1926 feature film, in particular, allowed the band free rein to try all manner of innovative effects, whether on kettle drums, tympani and cymbals, or — as in one knockout horse chase — pounding away on something like large earthenware plates. 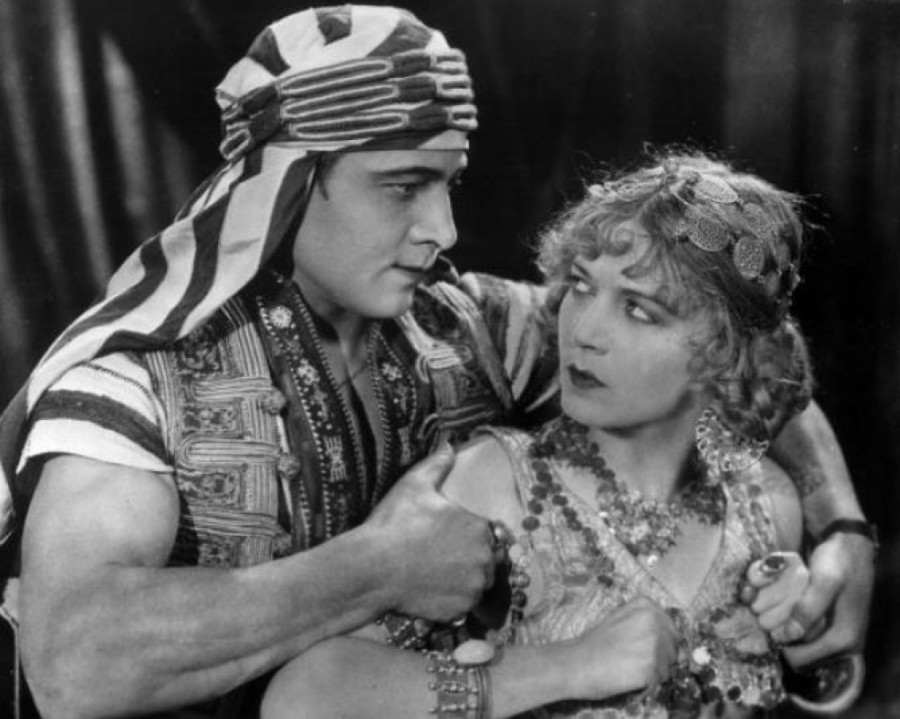 “Son of the Sheik” was conceived as a blockbuster sequel to 1921’s “The Sheik,” with Valentino this time out playing both an older, venerated sheik and his frisky, rambunctious son.

There is a subplot about the son’s well-bred English mother sending for a beautiful young cousin whom she hopes will spark the interest of her boy. But he has been off in the desert frolicking with dancing girl Vilma Banky, and the whole subplot is simply jettisoned.

The audience does not seem to mind. Nor do we care when Rudy mistakenly believes that Vilma has betrayed him to her tribe and in anger simply takes her against her will in a far-off tent. The veil of storybook romance obscures any potentially bothersome question of rape.

Valentino is on-screen nearly constantly in the dual roles, and it is wonderful to watch him both as the verile dune warrior and as the distinguished older sheik. The role of a handsome older man was one he never got to play in real life.

One can see in some scenes of “Son of the Sheik” the signs of wear and doubt beginning to show on Valentino’s smooth, 31-year-old face. For one thing, he was not thrilled about returning to a signature role he had been trying to transcend. Think of Sean Connery stepping back into old movie shoes in yet another James Bond outing.

Apart from that, Valentino was experiencing physical problems and existential concerns. He was plagued by bleeding ulcers, and deeply agitated over growing insinuations in the press that he was “effeminate.”
Shortly after finishing “Son of the Sheik,” he challenged one of those insinuating newsmen to a boxing match. He took several blows to the stomach that may have exacerbated his ulcers. Days later he was rushed to a hospital for surgery and succumbed soon thereafter to peritonitis.
“Son of the Sheik” opened nationwide two weeks later and the legend of Valentino grew.

If Valentino’s appeal is a mystery to you, you are in pretty good company. No less than pioneering film director D. W. Griffith declined to cast the actor in a 1919 film because, according to costar Miriam Cooper, he thought “his face wouldn’t appeal to women.”
Griffith, of course, had a genius for uncovering female film sensations like Florence Lawrence, Mabel Normand, Mary Pickford and the Gish sisters. But how many of us today can name the male leads of Griffith masterpieces like “Birth of a Nation,” “Way Down East” or “Hearts of the World”?
And yet everyone remembers Valentino. Even now one can see in Valentino’s elastic good looks the appeal to movie-goers that Griffith missed. His face was soft but could be hard and masculine when necessary. It was also bemused yet intense, playful and still passionate.
Above all, there’s an air of stalwart honor and trustworthiness there that must have been catnip to the giddy flappers of the Jazz Age.

Rudolph Valentino may have missed his chance to work with the master, but he went on to a brief yet phenomenal seven-year screen career that still intrigues and delights us nine decades after his death.
By the way, Griffith was not the only top-drawer Hollywood player who let Valentino get away. Executives at the Metro Studio had him under contract and even knew about his impact on audiences from “The Four Horsemen of the Apocalypse.” But they refused to offer him a salary hike at contract time, and Valentino became “at liberty” again — a fact that returned to haunt Metro moguls when they wished to cast him as the lead in their production of “Ben-Hur.”
That role eventually fell to another “Latin lover,” Ramon Novarro, a dark-haired Mexican actor who was soon hailed as “the new Valentino.” 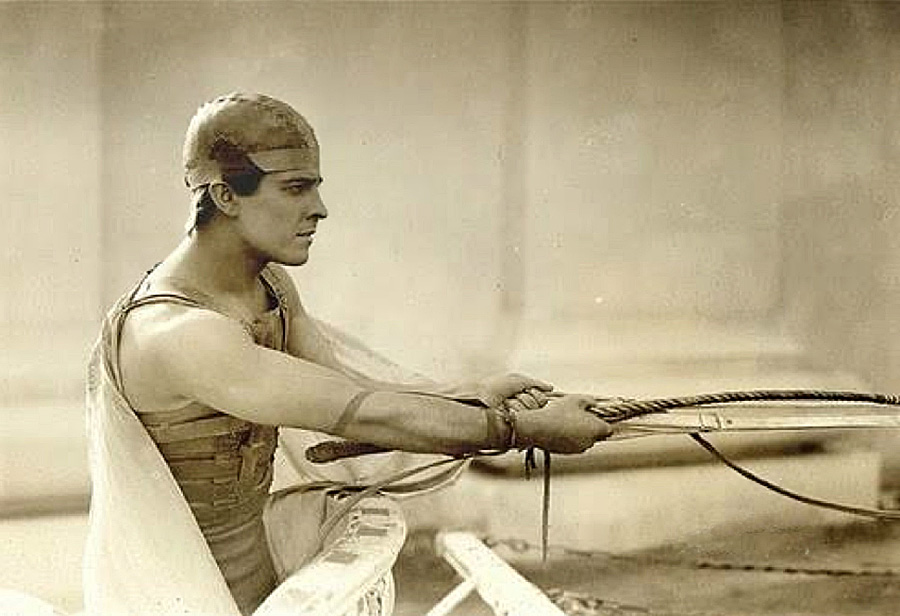 Read more about Ramon Novarro’s career and tragic death in my reality-based novel, “The Ben-Hur Murders: Inside the 1925 ‘Hollywood Games.'” It is available at Amazon.com as a paperback and a Kindle download, at Barnes & Noble, and at Lulu Press in an exclusive hardcover edition.